Well, that’s what he says anyway.

Flood arrived at our back doorstep during a heavy downpour, when she was only 6 weeks old. Knight and I noticed her when our outdoor cat,

Werthers, was stalking her. The creek was out of its banks the next morning, so the kids suggested we call her Flood. At the time, we already still had two Scotties in the house: Dizzy and Ouchie. Dizzy is Tigger’s dog, and Ouchie was Critter’s. Flar thought two dogs were enough of a handful and didn’t want to keep Flood. Flood is my dog.

When we first got Flood, she was smaller than the scotties. They were litter-mates who had never outgrown puppy fighting. They taught Flood how to fight and stole her food. When she got bigger than they, she would stand her ground and fight them when she thought they were after her food. Her worst trait now is aggressiveness toward other dogs. She’s relatively well-behaved in neutral territory on a leash, but when we established a picnic blanket at the dog park she fiercely guarded it. Sigh.

Flar grew up with only Scotty dogs for pets. Another strike against Flood is that she is tall enough to reach food on the kitchen counters. Our first Scotty, Quatre, was so well-behaved that you could put a plate of pizza on the couch next to her and she wouldn't eat out of it. (Unless you told her it was for her.) Flood considers anything that is “abandoned” in the kitchen to be fair game. She will also loom over you while you’re eating, in case you need help finishing. When she’s on good behavior, she will sit and stare at you. Since she’s sitting and attentive, she looks like a good dog to those who don’t know her better. ;)

Flood’s name is ironic, as she was much easier to house train than the scotties. Their attitude is, if you’re not in the room, it’s a reasonable relief zone. They ask to go outside by staring at you for maybe 5 seconds, then wandering off to find privacy. Flood will start with staring, progress to whining, then actually bark if you ignore her.

When Flar was growing up, his family’s scotties didn’t bark. Quatre didn’t, Zesty only did to ask in (for herself AND Quatre, it was the daughter’s job apparently), but Dizzy and Ouchie barked for pretty much any reason. They taught Flood to bark. Flar holds it against Flood, not the scotties.

Flood has a bad habit of slamming against the back door to try to open it. That used to work until we started using the dead bolt. The door is steel with a glass panel the length of it. Apparently strong stuff, since it’s still there. In an attempt to break her of this, Flar taught Flood to bark to come in .. by letting her in at the first bark. But he didn’t ignore the slamming — he yelled at her for it. Now she is much more likely to bark than slam, but he won’t let her in either way. And he complains about the barking.

Scotties shed their hair in a manner more similar to people. It kinda collects in corners as dust bunnies until sweeping happens. Flood is a short hair and sheds more like a porcupine. She loves the car, but the first thing she does when she gets in is release hair in a cloud like a porcupine shooting its quills. [*]Right -- they can't actually shoot their quills, but I swear she shoots her hairs. Her hairs appear to be equipped with micro-barbs, as they are very difficult to get out of fabric once they set hold. Flar is allergic to cats and not dogs, but he claims to be allergic to Flood’s hair.

Flar calls Flood names and jokes about killing her. But way, way back… In 2005, I got the privilege of taking the boys on a train vacation, circling from Cincy via Chicago to LA, San Antonio, Orlando, DC and back to Cincy. While we were on the leg to San Antonio, Flar was hospitalized with pneumonia. He was released after an overnight, but he was still pretty weak. The next day, Flood got hit by a car. Our house is pretty darn close to our road, the traffic rarely stays under the 35 mph limit, and there’s a hill on the approach from the west that obscures our section of the road until right before you get to it. Flood had gotten out and was ignoring Flar’s attempts to retrieve her. She was hit before the driver could stop. There was a lot of blood. It was late evening.

Flar picked her up and drove her to the emergency vet. They put her in doggy ICU in critical condition. They gave her antibiotics and pain meds. She had a pneumothorax for which they had to stick a big needle in her side to release the air and allow her lung to reinflate. She didn’t end up with any organ damage, but she had a lot of internal bruising. 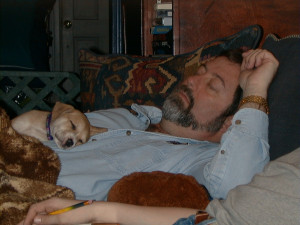 Flar got to stress about how expensive it is to care for a doggy emergency. He got to carry her when he had decreased lung function. He stayed up most of the night she was hit. It all put him back at least a day on his own recovery from illness.

But he saved her life.

And wow, re-reading old journal entries to figure out when all this happened? It’s amazing he kept my whiney self.

This has been an entry for the home game edition of The Real LJ Idol writing competition: the Final Season, Topic 18 : disinformation.
Collapse