“Today is a bad day” I say after the hubbub slows down and we’re listening to each other. “What kind of bad?”

Listening to each other - not talking to each other. Did it really take 30 years of marriage to identify the difference between talking and listening? We talk to each other “all day” - that portion of the day counted up in phone calls, texts and actual spatial proximity.

Listening is hard. Listening means bundling away all the battling cries for attention from physical pain (of late), physical emotion — how else to describe the background mood built up of sensory reactions that bubble throughout my body and brain, giving differing importance to relevant physical sense - whether bubbly humor, “have you ever noticed how silly that picture is?”

In the improv game that is life — it’s got to be improv: there’s no script, only vague instructions and rules — my character, that pilot or committee or whatever rules the grey sparkly matter, follows a trackless urban carnival of shiny or gloom. Filled with switchbacks and dead ends or paths off into the undefined and irrelevant wilderness. 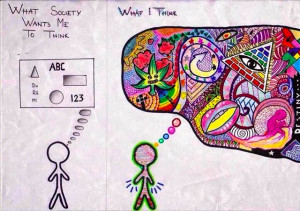 Is it any wonder that a depressive is more likely to ask for meds to “turn off all the thinking” than anything to light it up?

The classic symptoms of depression - the listlessness, sadness, despair, withdrawal, lethargy - For me, that’s what happens when all the thinking gets too overwhelming. There might be an outside trigger, but it’s excuse, not cause. What I felt as despair came out to Flar as anger, ever shortening or nonexistent temper. Temper, to moderate, lessen, smooth out. Take anger and turn it into an exploration of why.

“Why," the ultimate question that invites thinking: entering that scary maze. Just as “why” allowed Spock to appear to spin a tale actually narrated by the minds of the Talosians. “Why” just opens me up to those mazes inside. When I don’t have the courage or energy to face them, I snap out at the closest target instead.

I used to complain that Flar acted like an old Macintosh. I’d bare my feelings, tell him some sorry tale of grief and pain and emotion, and he’d just reply okay. That’s the only button Macintosh used to provide, along with the slapstick fizzing bomb, to dismiss the fatal error message that meant your work was lost and the computer would attempt to restart. No one is okay with that! Who wants to hear that all their work since their last save, potentially saved work as well, is down the drain? It’s no wonder that the modern operating systems have replaced okay with choices, even if it amounts to the same result.

Oh, and don’t suggest the old “repeat it back to show you heard it” ploy. It just makes me feel handled.

Living with depression started with recognizing I had the condition to begin with. With all that surrounded me, my mind’s biochemical emotion OS is somehow warped into depressive responses to input. If I can recognize that there’s not alway an external “why”, that my partner doesn’t cause it, then why should I expect him to fix it?

So back to listening. It’s a two-way street. “What kind of bad?” Listen to the care, listen to the limits of what can come from outside. Use the focus to cut away the drifting debris. "My foot hurts. I didn’t get enough sleep, so the fatigue is amplifying it. I was disappointed in an expectation. I’m overreacting and if I can’t handle no stressors, what about this stressor that’s coming up? I want to cry. I want to be held. I want to sleep. I want to pile it all away into a little ball and act like I’m happy.” Any one of these would be a way to get help. But sometimes all I can get out is. “bad"

"Yes, and." It’s an invitation to ask for help. It’s a way of saying “I care about you, and I want to help in whatever way you give me that I’m able."


This has been an entry for The Real LJ Idol writing competition: the Final Season, Topic 8 : Yes, and.
Collapse